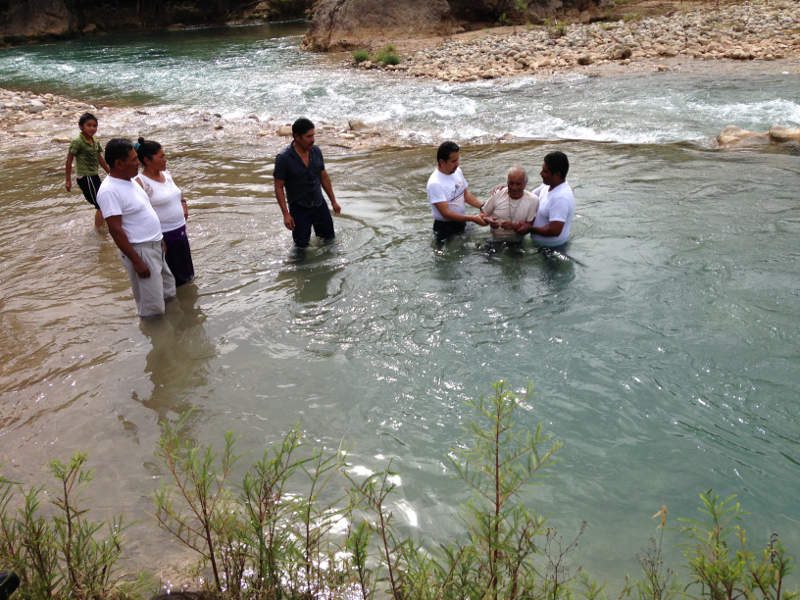 A year ago a large mob of tribal villagers in southern Mexico, armed with guns, ordered two native missionaries to leave for preaching about Christ.

Deeply suspicious of anyone outside their village, the tribal people were especially upset that the missionaries were learning their tribal language; this reinforced their fear that they were going to draw people away from their religious mixture of indigenous and Catholic practices. Already two families were paying close attention to the study of the Bible.

The animistic/Catholic practices involved drunken festivals and idol worship, the two missionaries realized. Expelled from the village, they were forlorn that all they could do for the two families attentive to the gospel was pray for them.

The native missionaries went to a nearby village, where people from the same ethnic group lived. One year after Christian Aid Mission emailed a prayer request that a miraculous opportunity for the gospel would open for the unreached people of this tribe, Christ is becoming known in the area.

Expelled from the village, they were forlorn that all they could do for the two families attentive to the gospel was pray for them.

“We thought it was the end of the work in that area, but now we see with joy that when they moved to a nearby indigenous tribal community, the doors were opened in three other communities of the same ethnic people group,” the ministry leader said. “In addition, they continue to visit the contacts of the ethnic community from which they were expelled.”

Native missionaries are convinced that their work in this area will grow, he said.

“We praise the Lord and celebrate that in recent months 12 new believers were discipled and decided to get baptized, despite the threats they have suffered after becoming believers,” he said. “Time after time these believers have told us, ‘No matter what comes, we will serve the Lord.’”

In another village in the region, residents who had fiercely resisted the message of Christ’s salvation now have a growing church.

In an area where evangelical Christians make up only 1 percent of the population, native missionaries saw their biggest victory when local authorities allowed them to hold a wedding, a Protestant ceremony open to everyone at the well-known community center.

“This was an event that served as a testimony to the community and established good relations with people who oppose the gospel,” the ministry leader said.

The gospel is spreading in Mexico as it is throughout Latin America thanks to the courage and commitment of native missionaries. Please consider a gift today to help bring the message of eternal life in Christ to people living in darkness.