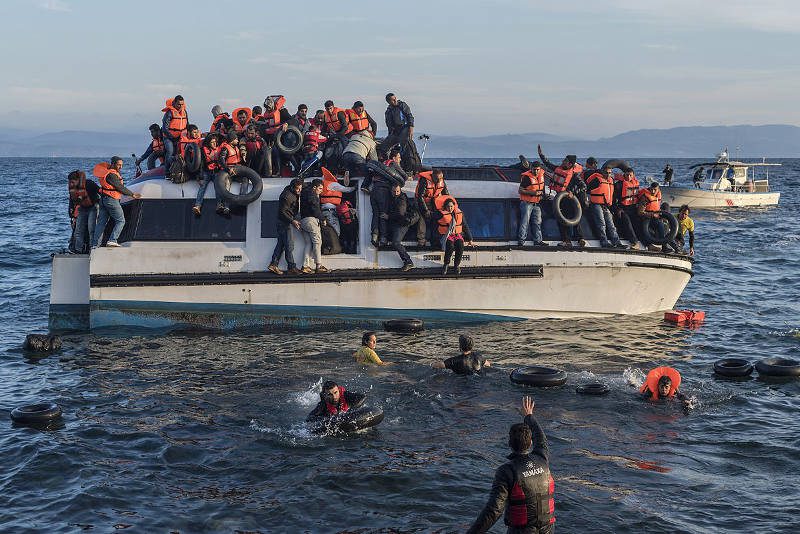 At a crudely constructed apartment in a remote area of Greece set aside for refugees, two families from Muslim countries shared living space for three months before they trusted each other enough to talk about their faith.

One family had been learning about Christianity before war drove them from their homes; the other family already believed in Christ after native missionaries in Greece shared their faith with them. The missionaries visit them regularly with food and other aid.

“After, we go in, they lock the door behind them, and they pull down a very thick curtain,” the leader of the native ministry said. “Every time that someone knocks, the owners ask who it is, unlock the door and then let them in.”

Most refugees in Greece today come from Afghanistan, and the families do not want to risk hard-line Muslim neighbors from Afghanistan and elsewhere finding out that they are learning about the Christ of the Bible.

Three years after Greece signed an agreement with Turkey to discourage Syrian and other refugees from trampolining off Turkey to Greece, Greek facilities for receiving them are still overwhelmed – prolonging the crisis for both officials and those seeking asylum. Many of the newcomers are disillusioned with Islam and open to the gospel.

Since Turkey and Greece signed the deal in March 2016, the number of refugees arriving in Greece declined from more than 861,000 at the height of the crisis in 2015 to a little over 50,000 last year. More than 170 of those trying to reach Greece were dead or missing in 2018.

The ongoing thousands of new arrivals are finding little welcome. As of May 19, another 12,668 refugees had arrived in Greece this year, according to U.N. High Commissioner for Refugees (UNHCR) figures – 8,431 by sea, 4,237 by land. In January alone, 2,652 people braved winter storms to cross the Aegean Sea in fragile dinghies.

Among those arriving by sea, nearly 40 percent are from Afghanistan; the next highest countries of origin among the refugees are Syria and Iraq at 13.5 percent and 13.1 percent respectively, according to the UNHCR.

Besides increased societal discrimination, arriving refugees face long waits in foul living conditions. Using plastic bags to carry their belongings, they get stuck in squalid camps on Greece’s islands while they await interviews to determine whether they will be sent to the mainland or back to Turkey. The 2016 pact calls for refugees arriving by boat to the Greek islands without permission to be returned to Turkey; European Union countries, in exchange, would then take one Syrian refugee from Turkey for every Syrian returned from Greece.

Even refugees granted permission to go to Greece’s mainland, however, are stranded on the islands as Greek officials say facilities are crowded beyond capacity.

Native missionaries offering aid and pointing refugees toward legal assistance are seen as heaven-sent. The two families sharing an apartment are also sharing a time of fellowship in Christ as more of them put their faith in Christ.

“Week after week, we lead to Jesus one person after the other,” the ministry leader said. “We become their voice to the authorities, we advocate for them, stand for them and then go back to their apartment for prayer and teaching and discipleship.”

Distributing food bags and giving traumatized refugees emotional and spiritual counsel has opened the way for gospel proclamation to thousands of souls over the past five years, and churches in Greece and in the final destination countries of the refugees have emerged as people have been healed, delivered from bondage and baptized, she said.

One of the refugees said he expected only orientation on how to apply for asylum when he first came to the native ministry.

“Looking at all of you, I was thinking and wishing, ‘How much I would love to be friends with these people one day,’” he told the director. “And now we are all standing in our place, studying the Bible!”

Another refugee noted, “After baptism, I feel like I have such a love in me I never had! I even love the other Muslims and want to tell them what Jesus has done for us.”

The ministry leader requested prayer for protection as more Muslims put their faith in Christ.

“Pray with us, because as we are praying for these people inside their place,” she said. “Outside their door, we can hear the Islamic call to prayer to an unofficial mosque that the rest are using.”

In Greece, Spain and other European countries, refugees from war-torn countries are getting their first taste of the Bread of Life. Please consider a donation today to bring them the love of Christ.

*This file is licensed under the Creative Commons Attribution-Share Alike 4.0 International license.