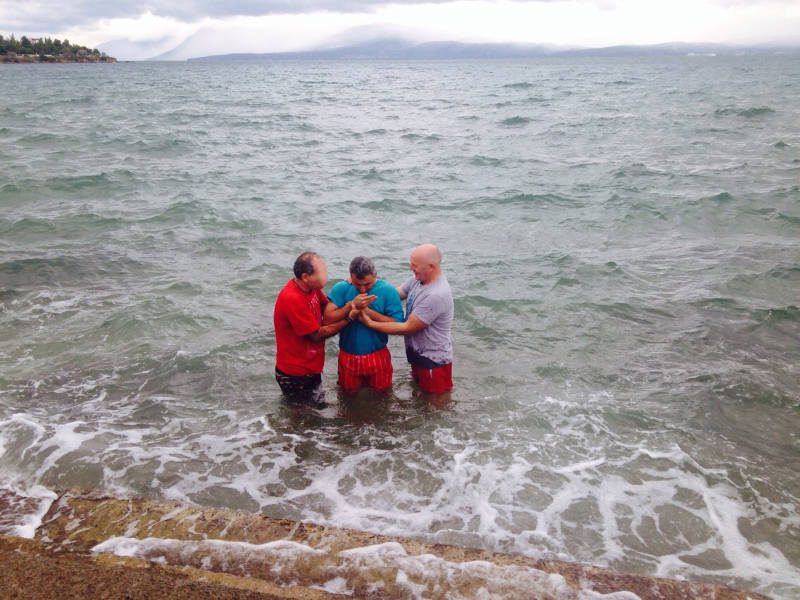 No Baptism Is Routine in Muslim Country

No Baptism Is Routine in Muslim Country

A government official in a Muslim-majority country in the Middle East thought that if he could just keep it secret, maybe he could become a Christian.

Muslims in his country, unnamed for security reasons, believe that to leave Islam is to betray the country. To be a government official and leave Islam was unthinkable, yet still he thought, “Perhaps I can secretly be a believer here.”

Living near a port city, his position had earned him great status and wealth. He had the faith to attend worship services at an established church led by the native missionary who led him to Christ, but he didn’t risk baptism. Recently the pastor was speaking about Christ’s sacrifice as he sat with baptized believers invited to the Holy Communion table.

Hearing about Jesus’ suffering and resurrection, the official became distraught that he had not made his faith public.

“It’s winter now, when the water is way too cold, and if someone sees you, you could lose your job,” the pastor said.

“I felt so sad after hearing your words of Jesus’ death and resurrection at the Communion table, and I no longer want to wait to participate,” he told the pastor. “I am not going to be afraid to be baptized publicly.”

The church leader and members of his ministry team went through lessons with him about the meaning of baptism.

“Where shall we baptize you?” the pastor asked him. “It’s winter now, when the water is way too cold, and if someone sees you, you could lose your job.”

He advised the official to wait until summer and be baptized secretly.

The pastor was reluctant to comply, given other church members’ experiences of persecution after being baptized.

Another secret believer who four months earlier had been miraculously healed of a paralysis also wanted to receive baptism.

“The day we chose was so cold, but these two men bravely weathered it and were baptized because their hearts were very warm,” the pastor said. “They went under the water and came out expressing so much joy, shouting God’s praises. We prayed that no one would hear, and this was another miracle.”

The official has told a good friend of his faith in Christ and planned to tell his family.

“We’re thankful for God’s spirit of courage given to him,” the pastor said. “It’s definitely a miracle. Please do pray for this dear government official that, when his family hears and when those in authority realize what’s happened, he may not have to suffer.”

The ministry saw nearly 50 others in the area baptized in the past year, and native missionaries in other countries throughout the Middle East are managing the same dangerous tension between public and private confessions of faith as Muslims turn to Christ. Please consider a gift today to help advance the gospel in the region.