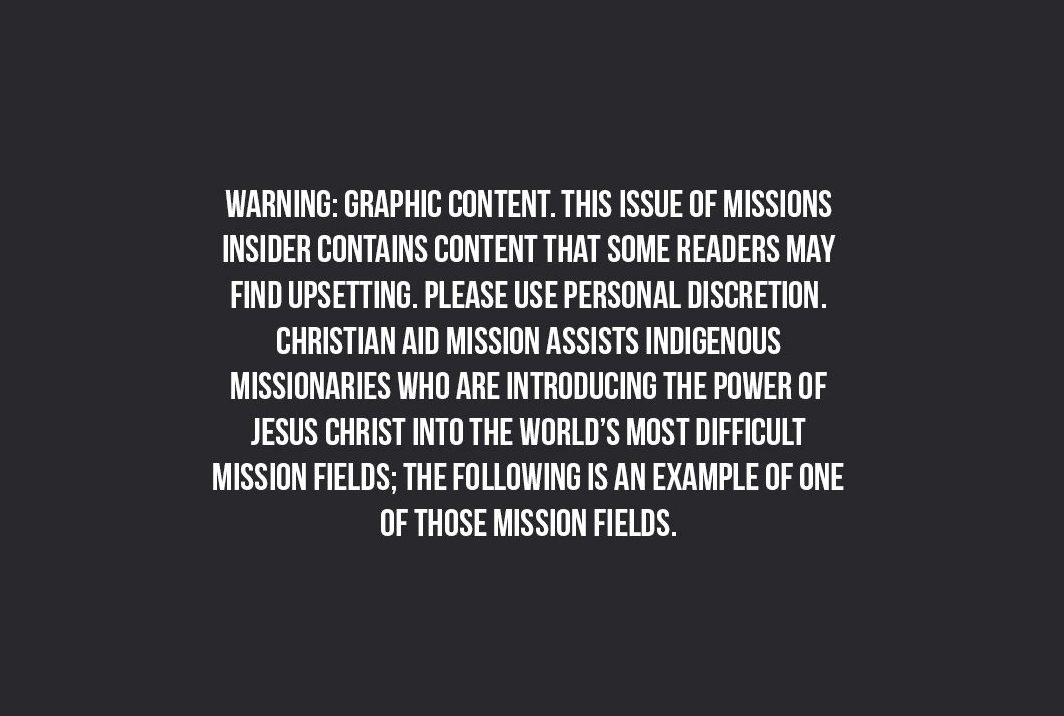 Belief in the power of spirits in Nigeria, even among the educated, is believed to contribute to the practice of ritual human sacrifice – which can make killers like Ben Adebayo* rich.

The witchdoctors who use vital organs, skulls and other body parts for occultic rituals pay handsomely for them, as their clients believe they can bring power and wealth when used in potions and amulets, according to Nigerian news reports. A “ritualist” like Adebayo was earning a good living cultivating human body parts – from people he killed – for “herbalists,” witchdoctors who use them in potions or incantation rituals.

Amulets and potions made of ritually sacrificed body parts are believed to make people invincible, protecting them from illness, accidents, economic failure or attacks from evil spirits, the reports say. While the traditional, animistic beliefs that accompany belief in ritual influence of the spirit world are common among the uneducated in Nigeria’s villages, such beliefs and practices extend to the well-educated in cities, local news outlets report.

Often chosen for ritual murder are “soft targets” like the elderly, the physically challenged and children, the reports say. Last December in Ondo state, two women in their 70s were hacked to death in their homes in separate incidents linked by a common practice – the removal of their vital organs for ritual use. A sociologist at Bayero University in Kano, in northern Nigeria, told an Agence France-Presse reporter that traditional shamans in the country prefer children’s body parts for get-rich-quick potions.

Often chosen for ritual murder are “soft targets” like the elderly, the physically challenged and children.

The 31-year-old Adebayo, whose location is undisclosed for security reasons, made a practice of luring young women with money, he told the leader of a ministry that Christian Aid Mission assists.

“He was involved in serious, occultic/witchcraft killing of girls, and then removing their breasts and private parts,” the ministry leader said. “He used this to make so much money, and he became so deeply involved in killing that he destroyed more than seven girls, whom they used for sacrifice.”

With the same intent, Adebayo arranged to meet a young woman who, he was unaware, was a missionary with the locally based ministry, the leader said. Adebayo commonly asked girls or women to accept money in exchange for helping him with some fake task, and they would then follow him into the forest as part of the ruse. There he would kill them.

He made the same kind of offer to the missionary.

“On this occasion, however, she resisted and prayed for the guy,” the leader said. “After many times trying to get the girl to come with him through ritual charms, instead of the charm working on our missionary, Ben saw himself tormented by the fire of the Holy Spirit.”

The Holy Spirit showed Adebayo spiritual truths in the following days as she shared Bible passages with him. She continued to pray for him and presented the gospel to him from different angles, sometimes emphasizing humanity’s sin, other times emphasizing God’s holiness. The truth of God sacrificing His own Son for the sins of humanity sliced through him like the cutlasses he had used to kill people.

“As the days passed, this young man gave his life to Christ and completely renounced this occult world,” the ministry leader said.

The ministry’s next task was equally formidable: They approached the herbalists, witchdoctors and others involved in ritual killings and trafficking of body parts – not only to save them from hellfires, but to keep them from turning on Adebayo. Like Adebayo, the traffickers and witchdoctors were Muslims who mixed Islamic practice with traditional occultic ritual, and Adebayo himself had to risk his life to help the missionaries introduce them to Christ.

“We reached his people and were trying to make sure they accepted Christ,” the ministry leader said. “Each time they tried to kill Ben so that he would not reveal the secrets of the spirit world, but in Christ he was stronger than them and was spared.”

Their attempts to bring the gospel to those involved in the ritual killing and trafficking of body parts resulted in a few repenting and putting their trust in Christ, while most were bent on killing Adebayo – and the missionary who led him to Jesus.

“We are discipling him now, along with the others who have accepted the Lord,” the ministry leader said. “Ben has really become strong in the Lord, and we trust your prayers for him. He told me he wants to reach his people and to reach those who are in the spirit activities killing people, and he wants to reach Muslims, since he is a convert from Islam.”

As do other ministries based in Nigeria, the group is also opening doors for the gospel by tending to the needs of people displaced by violence, including children who have lost their parents. By these efforts and other means, from drilling fresh water wells to home visits, they are spreading the gospel throughout the country, just as locally based missionaries throughout Africa are devoting all their energies to bringing Christ’s light into great darkness. Please consider a donation today to unleash Spirit-led efforts against dark forces throughout the region.