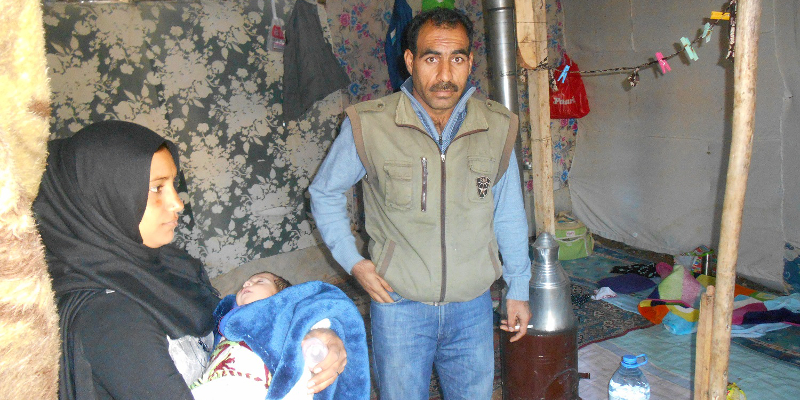 “Who are you?” said the refugee, a schoolteacher in his native Syria.

The Turkish ministry leader realized the refugee believed they would expect something in return for helping them.

“We expect nothing from you, we share your pain,” the ministry leader told him, in fluent Arabic (his second tongue). “We understand that you’re worrying about your kids – you are like us. Our God is telling us to do this, so we’re doing what He said.”

“Our God is telling us to do this, so we’re doing what He said.”

The ministry leader said the refugee told them he had never read in the Koran that Muslims should help people of another religion.

“We never heard that we should help unbelievers,” the refugee told them. “If we had the chance, our priority would be to kill you.”

Wanting to know more about what the Christians believed, the refugee invited the two workers to have some coffee and talk with him.

“We told him, ‘Our Jesus is not the same as yours [in the Koran] – our Jesus has a totally different character,’” the ministry leader said. “I told the man that he could call me anytime, day or night, and then he called in the middle of the night to talk to me about Jesus. He told me not to tell anyone what he was talking to me about, because there were ISIS followers in the camp. He is afraid but still wants to learn more.”

On that occasion and others that followed, they discussed the death, resurrection and salvation of Christ in detail. With such discretion, caution and months of providing blankets, food and other aid, native missionaries become the lifeline for desperate people – and build solid relationships upon which the love of Christ is conveyed.

“Thanks to the help given before, people and families have changed the way we are viewed,” the ministry leader said. “They were more hospitable and opened their hearts to us. This allowed us to communicate better with them, so that even people who had no hope and did not trust anyone learned to forgive, trust and most importantly, love.”

Coming from a country where eight years of civil war left retaliation and revenge ingrained in people’s mindset, refugees are profoundly touched to receive unconditional love, he said. They begin to treat others better as well.

“Just asking them how they are doing shocks them,” the leader said. “They’re surprised that someone cares about them, and they value this even more than the food and clothing we bring them. It reminds them that they’re human.”

The refugees need counseling and want very much to talk, once they overcome their initial suspicions, he said.

“Some organizations as well as the government bring supplies sometimes and just toss them to the people,” the leader said. “They don’t ask how they’re doing, they just deliver boxes. We show the love of Christ by taking a personal interest in their lives and their suffering.”

The ministry provided food, including baby food, diapers, blankets and other aid to nearly 750 families, or 3,000 people, during one six-month span, he said.

“We act sensitively to distribute the help we distribute in a fair manner,” he said. “Thanks to these activities, we shared the gospel more effectively, and thus 23 Syrian brothers and sisters were baptized. Our aim is to introduce more people to Jesus and make them know the real life.”

Syrian refugees are increasingly denigrated in Turkey as a drain on an already-troubled economy, and they face discrimination as Arabic-speakers of non-Turkish origin.

Blocked from moving on to Europe and with no homes to return to in war-wrecked Syria, the refugees are stranded in geographic and psychological limbo. The low-paying work in farm fields that some were able to obtain throughout the year evaporates in the winter, when the struggle against disease and cold intensifies.

The native ministry would like to provide aid to more people, as well as plant and strengthen more clandestine churches in different regions, the leader said. That goal includes the challenge to train more disciples, he said.

The leader of another native ministry working with refugees in Turkey said help for the upcoming generation is especially urgent.

“Last year we had enough given to us to provide winter clothing and school supplies for the refugee children,” he said. “We pray for the resources to meet these needs yet again. No matter what country people come from, they are coming to Christ.”

Native missionaries throughout the Middle East are providing such physical and spiritual aid. Please consider a donation today to help bring desperate people compassionate aid and the knowledge of God’s salvation.