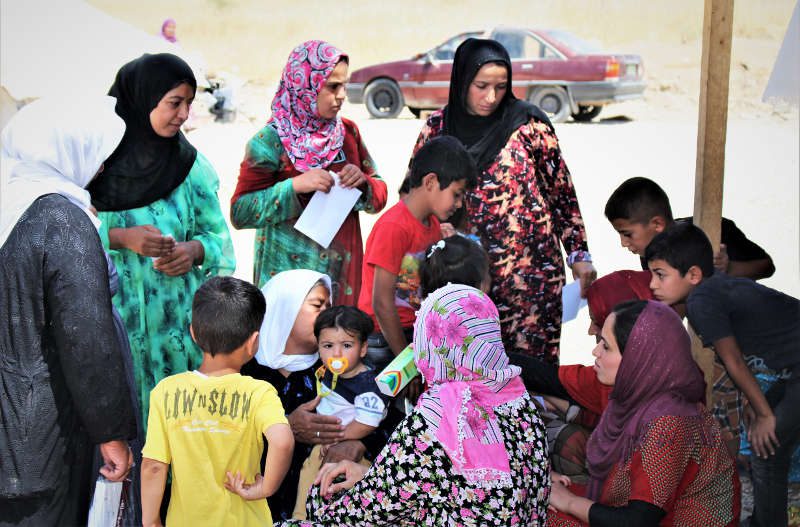 Reverberations from ISIS’s occupation of Mosul from June 2014 to December 2017 are still being felt after the terrorists killed thousands of civilians, and government military and counter-terrorism forces killed thousands more – civilians fleeing ISIS who were suspected of belonging to the group.

Whether they belonged to ISIS or not, their families suffered. Many families in Mosul have seen fathers and sons suspected of being ISIS militants put into government camps that essentially function as prisons, the leader of a native ministry said. ISIS reportedly continues to mount guerrilla attacks in Iraq, and its notorious black-and-white flag has been raised in some parts of Mosul, adding to fears. Families on both sides of the war who lost their men in the fighting are struggling amid Mosul’s demolished infrastructure and sectarian tensions.

“There is a Muslim lady with three children whose husband was killed in the war liberating Mosul,” the ministry leader said. “She asked us for a Bible for herself and her children. After we shared Christ with her and had a long talk about the Lord, she accepted Christ. She also allowed us to teach her children about Jesus, since they were brainwashed by the extremists.”

The family of nine camped in the field for three years while ISIS militants occupied the city. This alone was enough for them to decide to leave Islam.

Through this family, team members also had the opportunity to share the gospel with many members of her tribe – Muslims who had never been open to a non-Muslim faith before the ISIS occupation.

“We told them about Christ and gave them Bibles,” the leader said. “We also prayed with them, asking the Lord to change their hearts, since they had previously promoted evil and spread Islam. As of today, many of them have given their lives to Christ asking for forgiveness.”

In an area of Mosul where fierce street battles took place between Iraqi military forces and ISIS, the mother and a son in a family of seven were killed, he said. The hard-line Muslim family had welcomed ISIS control and its imposition of a harsh version of sharia (Islamic law), the leader said, but then for three years they suffered neglect, disease, hunger and death, besides warfare leaving one sister with a head wound and another with a foot injury.

“The family lived a real tragedy,” he said. “After visiting with them and telling them about the love of Christ, His forgiveness and salvation, and that He came to give new life, we all felt the power of the Lord in the place.”

They prayed and sang with joy, he said.

“The father said, ‘This house had not seen joy in three years until you entered with your Bibles and songs. I don’t understand how, but your Christ has made my daughters smile again! He seems like a real God, because I did not think we would ever be happy after we lost my wife and son,’” he said.

About 20 miles southeast of Mosul on the outskirts of Qaraqosh city, a Muslim family fled to nearby fields after ISIS took over Iraq’s largest predominantly Christian city. The family of nine camped in the field for three years while ISIS militants occupied the city, the leader said.

“This alone was enough for them to decide to leave Islam,” he said. “As soon as ISIS was kicked out of Qaraqosh and the first evangelism meeting took place, the entire family got saved. They accepted the Lord, took Bibles, and today there are discipleship trainings and church meetings in their house each week.”

Among the displaced people the native ministry is serving is a woman from Syria suffering from cancer. As workers had been providing relief aid to her for several years, she often wondered why they were doing so, he said. Telling workers she could find no explanation for their kindness toward her, she then received a Bible from them and learned that they were emulating the Christ-like life of service, the leader said.

“She now understands that what we have taken from the Lord is what we are giving to her – love,” he said. “She asked the Lord into her heart. She might not have much time left, but today she is sure that if her life ended, she has eternal life and she will be forever with the Lord Jesus Christ.”

The examples go on. The ministry leader said his team estimates there are at least four Muslim families, including 10 Muslim children, putting their faith in Christ every month. A Bible study springs up in the home of a Muslim family every month among the people they are serving.

“There is nothing more powerful that can change evil people to peaceful people, hateful to loving, but the power of the Word of God,” he said. “Your prayers are much needed at this time. With the glorious ministry the Lord is giving us, there are challenges, difficulties, needs, tears and persecutions.”

Native missionaries are bringing the love of Christ to hurting people in Iraq and throughout the Middle East. Please consider a donation today to send the message of God’s love throughout the region.