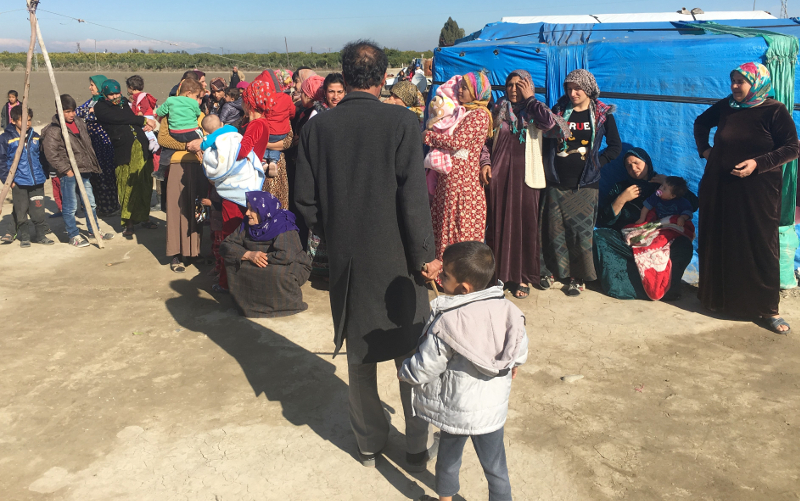 Aimar*, his wife and their two children had a comfortable life in Syria, before Islamic State militants took control of his city and seized his car.

As he sat in a freezing tent in a makeshift refugee camp in southern Turkey, he recalled how his children once asked him what they had done to displease Allah. Since fleeing his home and farming business under cover of darkness four years ago, he’d worked day and night to keep his family fed, but three days without work had left them without food.

“There was no food to eat, and the kids were crying and asking, ‘Father, why is Allah not giving us food? What have we done to him?’”

He told them that Allah was great and always provides, according to the leader of a native ministry who spoke with him.

“I was feeling uncertain about getting help from you and not from my own religion – we are taught that other believers are infidels, and that it is a sin to get anything from them.”

“But then,” the ministry leader said, “he told us, ‘The Allah we believe in has never seen us suffering, has never protected us, never looked after us, even though we have never done anything bad.”

Aimar said he prayed to Allah to provide work so he could work and feed his family. Local field owners later came to the camp to pick up workers to harvest oranges, but they didn’t choose him even though they knew he desperately needed the money, he said.

The next day, the native missionaries came to the camp and brought a food package for the family. When Aimar’s daughter ran to him saying people had come to help them with food, he took that as a sign to ask them who they were, he said.

“Once he knew that we are Christians and delivered food for them,” the ministry leader said, “he said, ‘I was feeling uncertain about getting help from you and not from my own religion – we are taught that other believers are infidels, and that it is a sin to get anything from them. So I didn’t want to take it because you are Christians. But I had no other choice, I have to take it to feed my family, to keep them strong until I can work.’”

The ministry leader, who speaks both Arabic and Turkish, told him that love for them and for God compelled them to help.

“After that he was so happy with our answer, and he said, ‘I was praying all the time to Allah, but he never answered me; instead I have received suffering and a desperate life here in the camp with my wife and two kids.’”

Aimar told them they had left an amazingly comfortable life in Syria in order to save their lives. First the Free Syrian Army fighting the government forces of President Bashar al-Assad had taken his city, then the jihadist Al Nusra Front thundered in, only to be followed by ISIS arriving to seize civilians’ properties, he said.

The life they imagined they would have in Turkey did not include enduring freezing winters in camps with no basic services, but Aimar said that he was happy that they discovered salvation in Christ there.

“Now he is very happy that he and his wife have accepted Jesus with all their hearts and minds,” the ministry leader said. “He said he is feeling totally free and has had all the weight lifted from his shoulders.”

About 3.7 million Syrian refugees have fled to Turkey, and Turkish President Recep Tayyip Erdogan has begun sending some of them back into an area in northeastern Syria, on Turkey’s border, following a military campaign to clear the area of Kurdish fighters.

At the same time, the United Nations reports that 284,000 people in the northern Syrian city of Idlib, the last rebel stronghold in Syria, fled their homes following a pounding by Syrian and Russian warplanes as 2019 ended and the new year began. While many of them were headed to other parts of Syria, Erdogan warned that 200,000 to 250,000 of them were moving toward the Turkish border.

The U.N. warned of a resurgent humanitarian crisis as Moscow and Damascus said the bombing of Idlib was designed to displace Al-Qaeda-inspired, Islamic extremists.

In the Syrian border area that Turkey and Turkish-backed militants carved out, atrocities by the Turkish-backed Syrian National Army have led to fears of an ethnic cleansing by preventing Kurds to return and repopulating the area with people of Arab descent, according to Foreign Policy magazine.

“Information provided to Foreign Policy indicates that the people now being resettled in the region are largely the families of Turkish-backed fighters who are originally from elsewhere in Syria and are primarily Arab and Turkmen,” the magazine reported.

Chaos in the border area could lead to yet more refugees in southern Turkey, though Erdogan has said Turkey cannot take them.

Syrian refugees have no desire to be resettled in the border area of northeastern Syria, where they have no property or heritage. Nor do they wish to be forcibly relocated as winter’s coldest, fiercest weather hits. Surviving in refugee camps is hard enough.

“It is especially hard in the wintertime – the people urgently need heaters and wood for fire along with winter clothes for the kids and elderly people,” the ministry leader said. “We are praying for more chances to bring help to the refugees to show them the Love of God. Thank God, three more Syrian refugees have declared to us that they accepted Jesus Christ as God and Savior.”

Native missionaries are providing such aid and the Good News of eternal life to refugees throughout the region. Please consider a donation today to equip them to bring the love of Christ to people starving physically and spiritually.