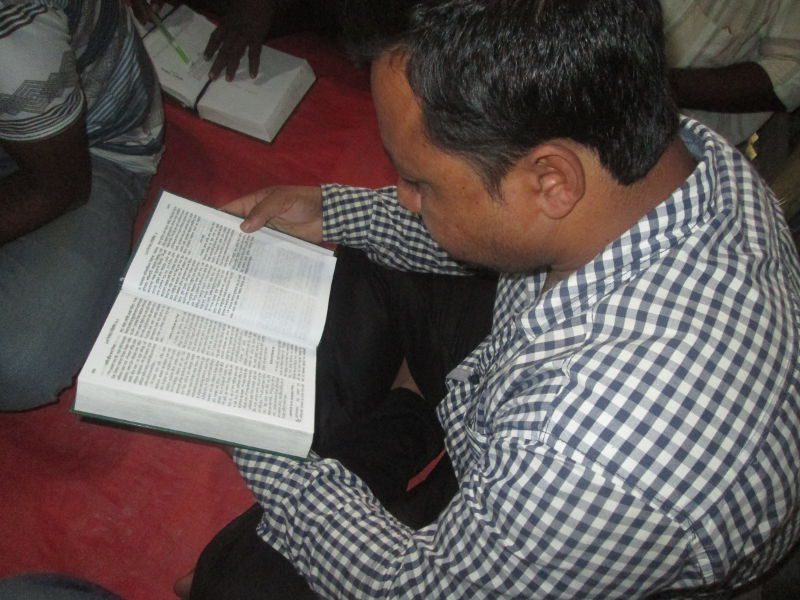 Jesus Shows His Power in Bangladesh

Earlier this year, a new Christian in Bangladesh overheard a Muslim tell a tea vendor that his health was getting worse each day.

Hassan*, a young father and construction worker who grew up Muslim in a city undisclosed for security reasons, had put his faith in Christ only two months prior. He was taking a break at a tea stall near a home that he was building, he said, when he heard the vendor ask his Muslim acquaintance how he was doing.

“That sick man replied with much depression that it was getting worse day by day,” Hassan said. “I asked him, ‘What happened with you?’”

The Muslim, Salman, replied that he had suffered from dyspnea, a debilitating shortness of breath, for many years. It kept him from working, and his wife’s income was not enough to cover costs for the family and his treatment.

“I placed my hands on his shoulder and prayed for him. I felt the Holy Spirit in that room.”

“He was really going through a tough situation,” Hassan said. “That day I couldn’t talk much with him. But one thing I told him in faith, that if you believe, you would be healed by Someone. He was surprised about what I told him, because he went to many doctors for healing, but nobody was able to help him.”

Hassan gave him his address and invited him to come to his home. He said he prayed for Salman at work and again later with his family. When the next holiday day off came, he said, Salman showed up at his apartment.

As is customary in Bangladesh, Hassan warmly welcomed him into his home and asked him about his family and health. Everything has continued as usual, Salman said, pointing out that his wife was still working all day to try to earn enough to make ends meet.

“I saw him very tensed about his family and kids,” Hassan said. “Their future was dark, and there was no hope for a future for them. I encouraged him to say something more about what he had in his mind. He shared every sorrow and worry on his mind. I wanted to make him relax from his sorrow and sufferings. I felt that he couldn’t handle any more.”

After listening for some time, Hassan began to tell him there was Someone who could take all his sorrow and suffering.

“He is waiting for you to come to Him and accept Him with all your heart,” he told him. “I asked him, ‘Do you want to receive Him as your savior? Because neither I nor a doctor can heal you, but only He can change your situation, and He can heal you.”

It would cost him nothing, Hassan told him. “The thing you have to do is to believe Him with your whole heart.”

Salman asked him to tell him more about Jesus. Hassan spoke about Jesus’ ministry of teaching and healing and His power to him, he said, adding that Salman was amazed.

“I asked him to pray with me,” he said. “He refused to pray with me at first, saying that because he was not a Christian, Jesus might not listen to him. But I assured him that Jesus listened to everyone who called Him with their heart. I encouraged that brother to call Jesus with his heart.”

After further discussion, he said, they prayed to Almighty God.

“Me and that brother kneeled down in front of a bed and bowed our heads,” Hassan said. “I placed my hands on his shoulder and prayed for him. I felt the Holy Spirit in that room. We prayed for a long time, and that brother cried and asked for forgiveness from God. He asked for healing and peace in his body and family. In the middle of the prayer I stopped my prayer and I found that the brother was continually praying to Jesus. He received Jesus that day.”

“He came to my home again with his family and shared about his healing,” Hassan said. “He was no longer suffering from dyspnea. He’d gotten a good job, and his wife was able to get some rest. He was very thankful to God.”

“He and his wife were also baptized after that,” he said. “Now they are serving God, besides doing their jobs. They shared their testimony with others, and some more people came to know Jesus. It’s amazing.”

Like gospel workers throughout South Asia, Hassan shared Christ with someone suffering apart from God, prayed with him, baptized him and modeled faith while spending time with him. Such workers are seeing fruit throughout the region. Please consider a donation today to equip them to bring God’s power to people pining for help.