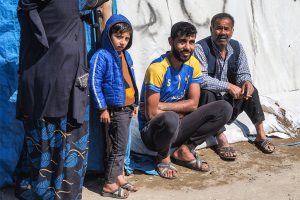 During a time of war, a Muslim who had learned about Christ through satellite TV programs had no one to answer his questions about Christianity, but after fighting ended he told a local missionary that when his city was being bombed, Jesus had visited him in a dream and given him a message.

December 1, 2022
The Muslim uncle of a 17-year-old girl under demonic influence was visibly irritated when local missionaries showed up at the door of their home in a refugee camp. The Muslim parents of the girl had requested they come to their home at the camp in Lebanon for Syrian refugees, but her uncle did not approve, especially as it was the Islamic month of Ramadan and the girl had already driven out a Muslim cleric who tried to help her. “The cleric had been met by the young woman’s screams and her aggressively pushing him away from the home,” said the leader of the local ministry. “As he began to leave, their daughter encouraged his quick movement from the property as she picked up stones and began throwing them his way. He left promptly and did not return nor seek out her parents.”
Read more

November 17, 2022
The wife and children of a new Christian in Indonesia still refuse to live with him, even though he has turned from his prior life of taking drugs and robbing people to support his former habit. By the time Dimas Sinurat accepted Christ, workers at the native ministry had discovered that discipling new Christians by simply scheduling times of Bible study and prayer was impractical and largely ineffective. With Sinurat and others, they have adopted an entirely new approach that is forming more committed believers.
Read more

November 10, 2022
A young man in Iraq who had left Islam to follow Christ recently began teaching school in an area where children of Islamic State (ISIS) fighters were living. Kassim Mahdi* had grown up watching ISIS militants destroy buildings and lives in his hometown, the leader of a native ministry said. “He saw many of his friends and relatives killed, and he did not believe that God sent His messengers in this way,” the leader said.
Read more

November 3, 2022
A native missionary was the only one who knew how to reach a jungle community in northern Argentina. Returning to the area to share the gospel and bring discipleship materials to a small church plant, the worker spent 10 hours making his way through thick foliage to reach the destitute tribal people. “It’s a risk,” the leader said.
Read more

October 27, 2022
A university student in Turkey often saw the cross on a native ministry’s church building while walking with her boyfriend, and a few months ago – though she was from a strict Muslim family – she suggested they check it out. Her boyfriend of three years, Ahmet Korkmaz*, saw no point in doing so. “There’s nothing in this church,” he told his girlfriend, Beyza Yavuz*.
Read more

October 20, 2022
The headman of a village in Laos summoned a local missionary to his office. “I heard that you are speaking to people in the village, and you are talking about Jesus, and now people told me that some of them are interested,” the headman told him. The local missionary, pastor of a house church, showed the headman a government booklet stating that Christianity was one of the officially accepted faiths in the country.
Read more

October 13, 2022
For 10 years a veteran of the Iraq-Iran war wondered how he could respond to Christ for having freed him from needing a wheelchair. Years after losing use of his legs, Mustafa Abbas* was watching a Christian progam on a satellite channel in 2011 when he followed the speaker’s encouragement to pray in Christ’s name for healing, he told ministry workers in his native Iraq.
Read more

October 6, 2022
A Kurdish family recently fled from an oppressive government in Iran. After walking 37 nights in the mountains of Greece, the mother’s feet had swollen so much that they no longer in fit her shoes. She also had a skin infection, as did one of her children. “They had been walking at night and sleeping during the day, hiding in the mountains,” the leader of a ministry in Greece said.
Read more

September 22, 2022
Muslim extremists often appear in refugee camps, and word spreads that native missionaries bringing aid to the tents pray with refugees and leave Bibles for them. So workers were concerned when a grim-faced refugee camp leader summoned them to talk over tea.
Read more

September 15, 2022
Kimbap was on her way home from work in Cambodia last summer when she saw a gang of teenage boys assaulting a younger boy. Though a lifelong Buddhist, Kimbap had been listening to a Christian radio program for several days, and when he screamed for help, she instinctively began praying to Christ.
Read more

September 8, 2022
Burma’s internal military conflicts have curtailed ministry efforts, but the chaos also has helped expand God’s kingdom as displaced people take refuge at a Bible college and Christian camps. Among those fleeing to the jungles or to neighboring countries are young people, a native ministry leader said.
Read more