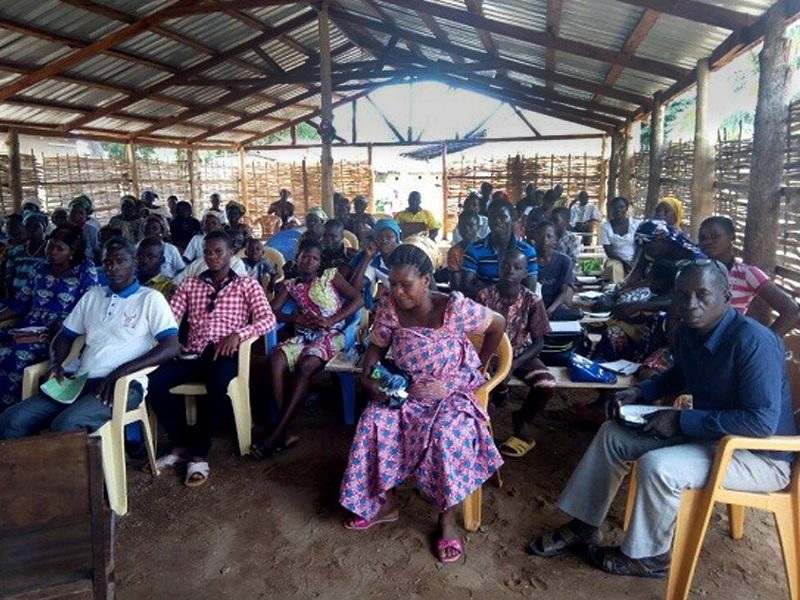 A team of 26 native missionaries prayed that it would not rain during a recent outreach to a village in West Africa, because most of them would be sleeping in the open air.

In Togo, one of the poorest countries in the world with more than 80 percent of the population below the global poverty line, native missionaries live like most people do – in hardship.

They went to the village in central Togo because they knew people there had never heard of Jesus, but they had to be willing to adapt to the local economy. The village had little space for visitors to spend the night. They managed to find a small shanty to rent for the women, and the others slept on the ground or on benches.

No rain water fell, but during home visitations, stones did rain down on some of them.

They threw stones against some of the evangelists during our house-to-house outreach program.

“There are some voodoo specialists in the village who were against us, saying that we have come to destroy the powers of their voodoos,” the native ministry leader said. “They threw stones against some of the evangelists during our house-to-house outreach program. Some villagers refused to welcome us in their homes, and we were cursed by some wicked juju men [witchdoctors].”

No one was injured, and the curses had no effect. After the team had spent several days building relationships with the villagers, a sizeable crowd gathered for an open-air event.

“We praise God that His protection was with us and nobody was injured among us,” the leader said. “And we thank God for bringing some of those wicked people to the obedience of the gospel during our open-air campaign.”

Difficult conditions are nothing new to the native missionaries. At another village, the ministry recently crammed its four-to-six day evangelistic seminars of two hours per day into a single eight-hour session because it could not afford to rent the venue for a longer span.

“To organize such a seminar, either in a city or in a village, based on soul-winning or with the aim to win souls, it requires money to hire the venue, to buy food and water for the participants, to pay for transport, and so on,” the leader said. “We don’t collect offerings so as not to hinder the gospel. This seminar counted 65 participants, and at the end, 25 of them were saved.”

At a later seminar at another village with 83 participants, 23 put their faith in Christ.

As a result of such work in Togo and other countries of Africa, churches have been planted in many villages that had been hostile to the gospel, but they need financial help to carry out the most basic outreach. Please consider a gift today to enable native ministries in Togo and other African countries to bring the gospel to their people.